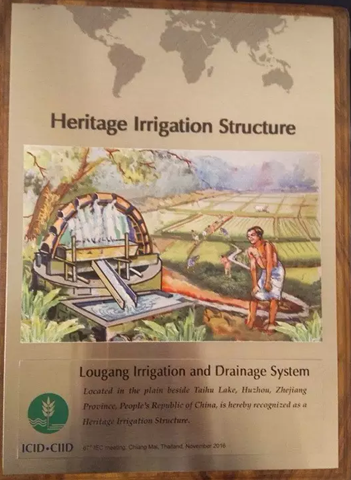 The Lougang Irrigation and Drainage System in Huzhou, Zhejiang province is recognized as a Heritage Irrigation Structure.

The Lougang Irrigation and Drainage System in Huzhou, Zhejiang province, located in a plain south of Taihu Lake, was recognized as a Heritage Irrigation Structure at the second World Irrigation Forum and the 67th International Executive Council Meeting in Chiang Mai, Thailand on Nov 8, 2016.

The irrigation and drainage system is an ancient waterway seen only in the Taihu Lake basin; the oldest and most intact section is located in Huzhou.

Built during the Spring and Autumn Period (770-476BC), the Lougang system was constructed primarily for drainage, irrigation and navigation. It continued to develop until its completion during the Northern Song Dynasty (960-1127).

Huzhou has made great efforts to protect and to use the old system. Based on it and the surrounding ponds and canals, the city promotes crop production and water transportation, upholding its values in water conservancy, economy, ecology and culture.